Gentrification and Human Rights in Durham 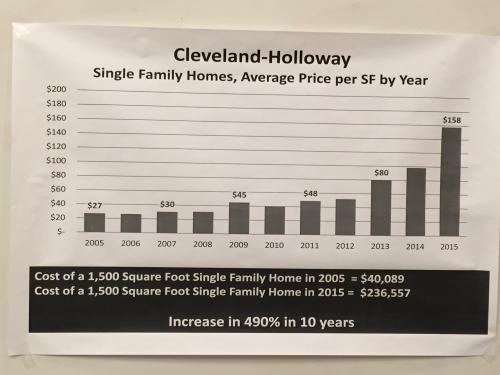 “Gentrification is not synonymous with neighborhood revitalization, which is a ground-up process that benefits the entire community,” Norton, also the project coordinator for the Durham Living Wage Project, said. “Gentrification is fundamentally a social justice issue, and it’s happening right off of Duke’s campus.”

Norton spoke at the Franklin Humanities Institute (FHI) Garage in Smith Warehouse Wednesday night to a packed house of students, faculty and downtown Durham residents. Her talk, titled “The Big ‘G’: Gentrification and the Dynamics of Neighborhood Change,” was co-sponsored by the Forum for Scholars and Publics, the Duke Human Rights Center at FHI and the Pauli Murray Project. It was the first in a yearlong series of public talks and discussions called “Our Right to Say: Gentrification and Durham’s Future.”

“We’re taking Malcolm X as our starting point,” Kirk said. “He saw gentrification as a human rights violation because he saw people getting priced out of their homes and neighbourhoods. There is something deeply unfair happening in Durham right now and we wanted to try and get a handle on it and use this idea of human rights to do that.”

Norton defined gentrification as the phenomenon of rapidly rising home prices in areas that have historically been deprived of economic opportunity, usually on the basis of the racial composition of the neighbourhood. In downtown Durham, Norton said the revitalization of the city’s core coupled with favourable historic preservation tax credits in surrounding historically black neighbourhoods have bred a particularly fast-moving and harmful strain of gentrification.

In the Cleveland-Holloway neighbourhood, home prices have increased nearly 500 percent in the past decade, while the wage needed to afford housing in the downtown area is now over 200 percent the minimum wage.

“When I talk to people about gentrification and present these statistics, I come up against hopelessness and cynicism,” Norton said. “I get that, but there are definitely things we can do to make the city fairer moving forward.”

Among Norton’s policy recommendations were pushing the City of Durham to devote 15 percent of housing near transit stops to affordable housing and increasing financial support for the Durham Community Land Trustees, a nonprofit that purchases and holds land in neighbourhoods at risk of gentrifying to maintain low home prices.

“I’m not cynical about the future,” Norton said. “It comes down to having conversation about what and who we value and how we turn that into political action.”