Mass Incarceration and the Carceral State

The United States has by far the highest incarceration rates in the world, with approximately 1 in every 108 American adults (2.3 million) currently in jail or prison. It is deeply divided by race: 1 in 15 African American men are currently incarcerated, and 1 in 36 Hispanic men, compared to 1 in 106 white men. In 1972, there were only 300,000 people behind bars in the U.S. The effects of this transformation are felt across the country and the world—not only in prisons, but also in schools, workplaces, courtrooms, boardrooms, and families. Scholars are just now beginning to ask how mass incarceration has reshaped society on a wider scale. Incarcerated populations frequently fall outside our efforts to understand history and society, and to direct public policy, because scholars and policy-makers too often treat incarcerated individuals as if they have been removed from society. 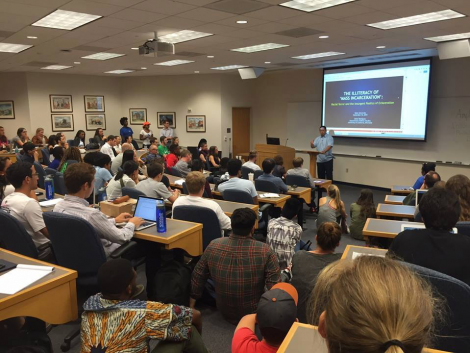 The purpose of the 2015-2016 “Mass Incarceration and the Carceral State” initative was to provide dedicated forum in which people could collaborate across disciplines, share knowledge and pedagogical resources, and keep each other abreast of projects. Students have shown great interest in courses and campus events related to imprisonment, policing, and human rights abuse, but they lack the means to transfer their learning from individual courses to a wider, ongoing dialogue. The project offered a full year of programming to open important conversations on mass incarceration, imprisonment, policing, and capital punishment to the community-at-large, bringing together scholars, practitioners, activists, and community members, including those most directly affected by the carceral state.

There was a public lecture series during 2015-2016 that featured recognized experts on mass incarceration:

The project also involved designing and teaching a new undergraduate course, Global Dialogues: Incarceration, in which students contributed to the Humanities Action Lab (HAL), a national network of scholars devoted to research on mass incarceration. This work culminated in a traveling exhibit designed by undergraduates from all participating institutions (View the video of Duke students’ presentation at the States of Incarceration Conference). It also involved three existing courses with visits from community-based speakers and visiting scholars, as well as opportunities for vertically integrated collaboration beyond the classroom.

Read more about the “Mass Incarceration and Carceral State” project on the Humanities Writ Large website.