Until this summer, I felt like a fraud every time I was asked about my research. My response was always the same: “I study the ways in which climate change impacts human rights with a specific focus on climate migration in Central America and Mexico.” All of that is true. However, all of my research on the topic had been conducted from behind the screen of my laptop, far away from the countries I was researching.

In the five weeks I spent in Mexico interviewing policymakers, NGO leaders, civil society workers, and migrants, I gained rich insights that changed and deepened the way I view climate migration. Before arriving, my plan was to focus my research on policy solutions for protecting the human rights of climate migrants from Central America that arrive in Mexico and the U.S. After speaking to many practitioners, I learned that a first-order issue they have is educating officials, agencies, and organizations that work with migrants about the link between climate change and migration. If this link is not understood, then no one will advocate for policy change that incorporates the positionality of climate migrants and holds climate-changing states accountable for the impacts they have on the migration system.

One of the organizations that I met with, Sin Fronteras, has started to track climate change as a reason for migration in their interviews with migrants. Interestingly, they have found that around 15% of all migrants are driven, at least in part, by a climate or environmental reason. In the majority of cases, however, the organization discovers that climate plays a part in migration decisions in interviews beyond the initial one (e.g. the second, third, or fourth interview). I believe that this is partly because climate change may cause someone to move from their hometown to an urban area in search of a job, but ultimately violence and lack of economic opportunities may cause that person to leave their country. As such, the most salient reasons for their migration are the most recent ones. Furthermore, the asylum system has been set up to recognize specific drivers of migration, and migrants have learned which parts of their story fit into that system. Since climate change or environmental drivers are not recognized as significant drivers, migrants also may not choose to highlight it even if it was significant to them.

I also believe the conceptualization of climate change by migrants themselves is a critical part of the story. If one does not know about climate change, they may assign their environmental hardships to bad luck rather than to the actions of states and corporations that have systematically caused rapid changes in the climate. If migrants were taught about the drivers of environmental change, it is possible that an understanding of the injustice would change the way that they frame their narrative. Taking these various factors into account, I plan to dedicate a stream of my research to better understanding how to uncover climate change as a driver in migrants’ stories, in order to better equip organizations with the data to push for greater accountability in the form of receiving migrants by countries who have emitted the majority of the greenhouse gas emissions responsible for climate change.

In order to gain more insights from those directly affected by migration, I am going to spend the next month in Guatemala conducting the same interviews that I did in Mexico. By the end of the summer I hope to be able to compare the climate migration landscape, both as it relates to experiences and policymaking, across both contexts. As I head off to Guatemala, I have a deep feeling of gratitude for the many people who have shared their time and insights with me so far, as well as to the Duke Human Rights Center @ the Franklin Humanities Institute for the opportunity to have this experience that is undoubtedly deepening my knowledge-base and skills as a researcher. ¡Seguimos! 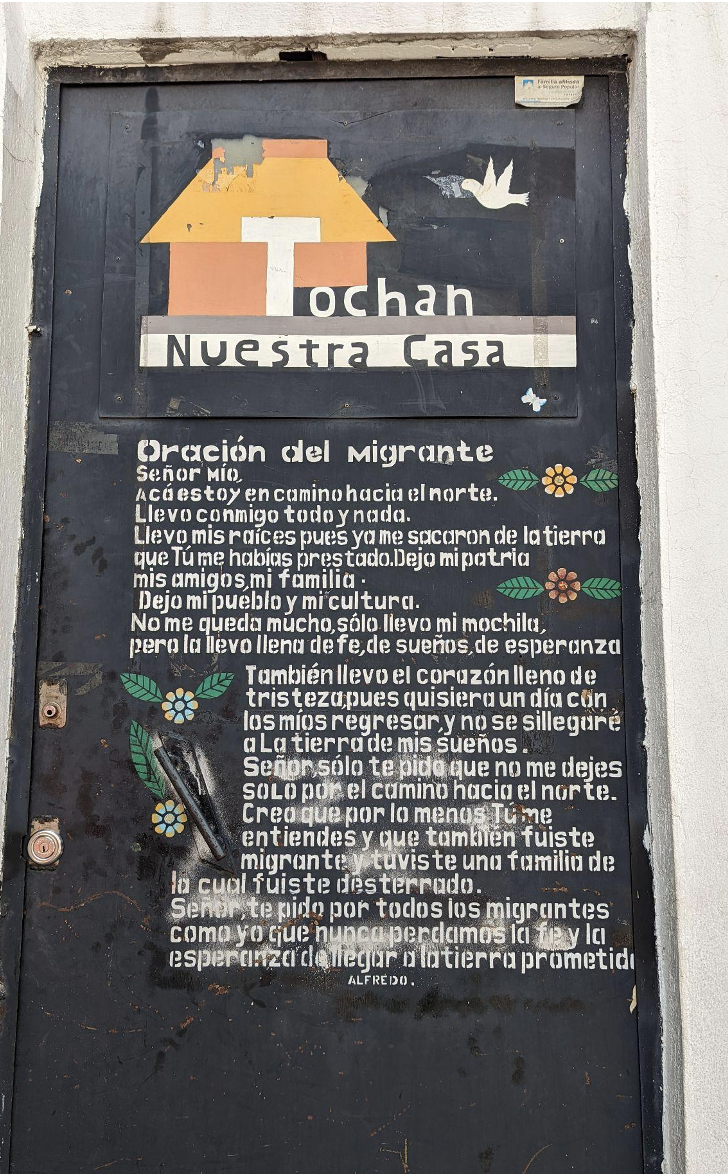